Many craft brewers are foreigners or educated abroad. Craft beer came in 2015 and now it´s harvest time for the self learnt Vietnamese brewers. Thanh at Homie Brewhouse is one of them.

Thanh started to brew at home a few years ago and in October 2016 he opened Homie Brewhouse together with his wife. There has been many late nights and early mornings with long brewing sessions before he started to develop recipes to for the brewery. It seems that the beer is taking their relation to a new level and we can hope their children will be brewers as well.

Homie Brewhouse is a small nano brewery with a capacity of 250 liter. So far they have four beers; Hanoi IPA, AK Pale Ale, T’nT Triple and Cam Wit. Beers are sold at Beer temple Hanoi which is a old beer establishment in town. On the beer app, untappd.com all beer together has less than 50  check ins. So its small and new! 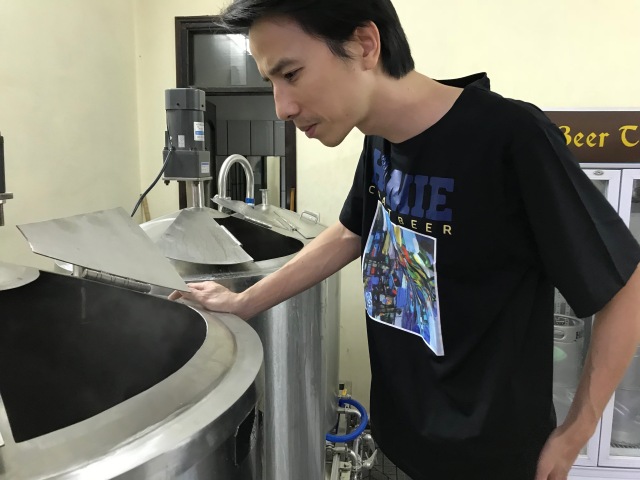 Beers are served at a few places in Hanoi, both in bottle and keg.

Homie brewhouse delivering beers to the Beer Temple where you can find a good selection of classic Belgian beers and more. See what they have online at beertemple.net.

1 Response to Homie Brewhouse in Hanoi