A different pub crawl in Hanoi

Do a different pubcrawl in Hanoi. Instead of running round in the Old Quarter, take a taxi to this area or local bus nr 50 from Tay Ho. 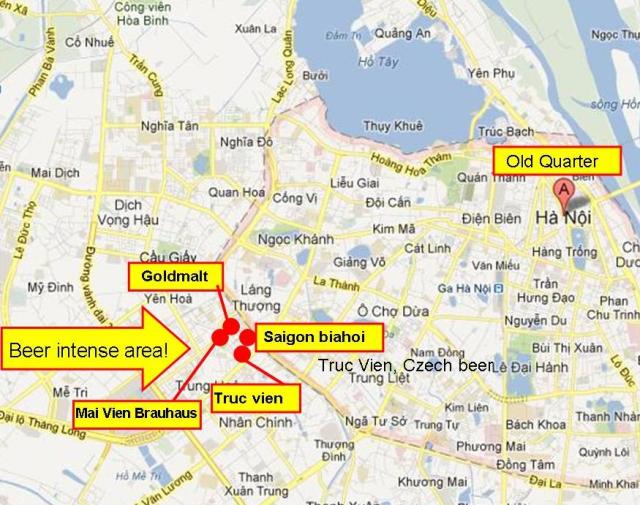 There are today 10 Goldmalt breweries in Hanoi and this one is quite new, 8 month old, situated in a very interesting area if you want to do a pub crawl. Trung Yen is full of small bia hoi places and you can also find some Saigon special on keg, which is SABECO:s answer to Bia hoi. Bia Hoi is made by HABECO which are dominating in the north of Vietnam. Like Bia Hoi Hanoi, this beer is also made of rice mixed with regular malt, contains a minimum of hops and has a very light taste and mouthfeel. Anyhow, that can be a good start of a pub crawl in this area, within 10 min walking disatnce you have also Mai Vien Brauhaus and Truc Vien, both making Czech styled beer.

Watch a video clip of this brewery, filmed from the motorbike! https://www.youtube.com/watch?v=6BOO4xxEoBA 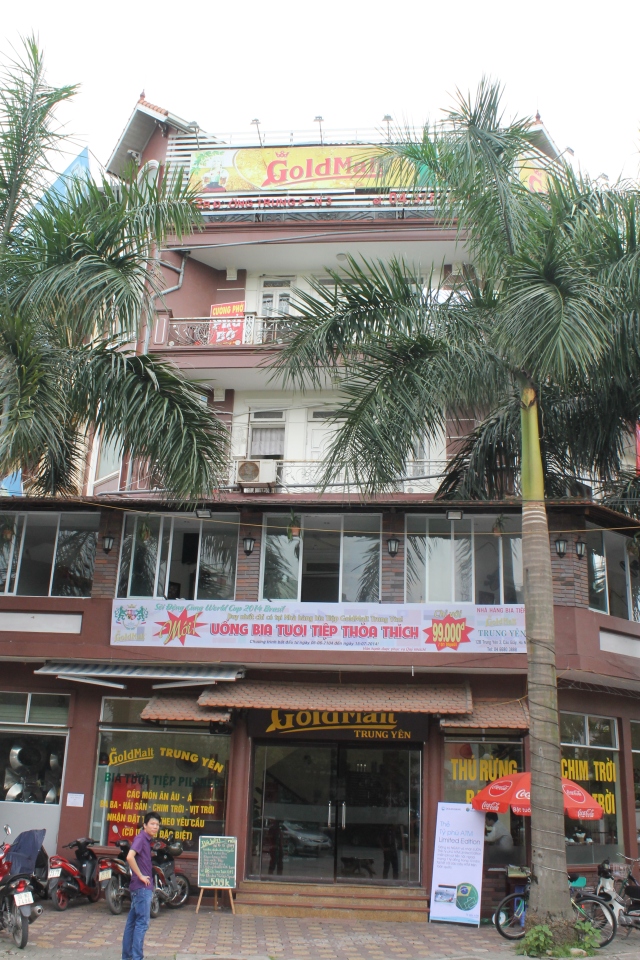 There are english speaking staff and service is good. The black beer has strong notes of coffee, the result of a intense roasting and has a lighter body than in Goldmalt at 34 Tran Phu. The blond beer is also a bit lighter in its body and more of a tasty lager. The strenght is good in both beers which approximately is about 5 %. 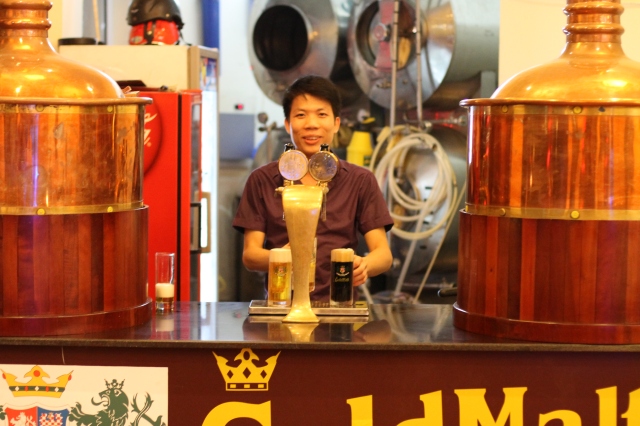 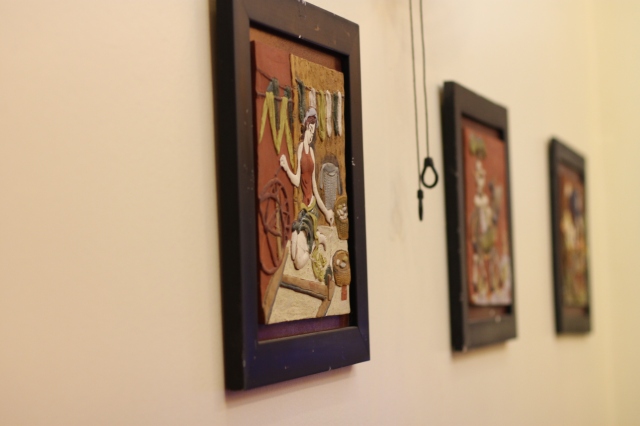 The interior design is different from other goldmalts and instead of pictures from Czech Republic and Germany they have paintings with ethnic vietnamese motives. The address is: 12b Trung Yen 3, district Cau Giay, Hanoi

The menu is Vietnamese and they have also aquariums with fish waiting to be delievered upon request. As usual, the safe cards; honey grilled ribs, morning glory and french fries is a good combination with beer. 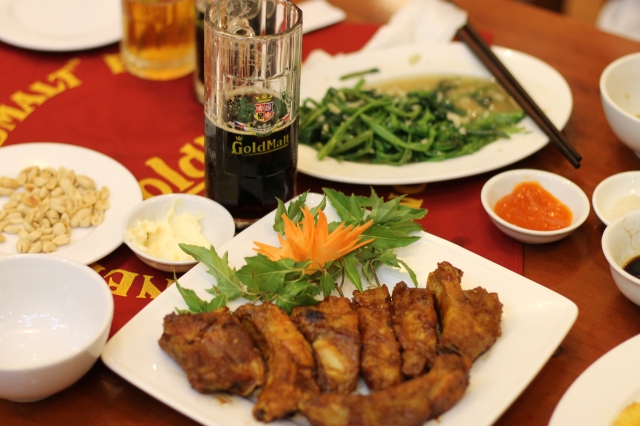 Start with a lighter beer first…

Start first with a short visit at Hai San Gio Bien at 21 Nguyen Khang, a few hundred meters before Goldmalt Trung Yen. Order a minikeg with 2 liter of Saigon special biahoi, light taste, light body and with a white foam. Price is about 70 000 vnd for 2 liter. Here you can see Emil from Sweden and the Beerman having a proper tasting of this mini keg. 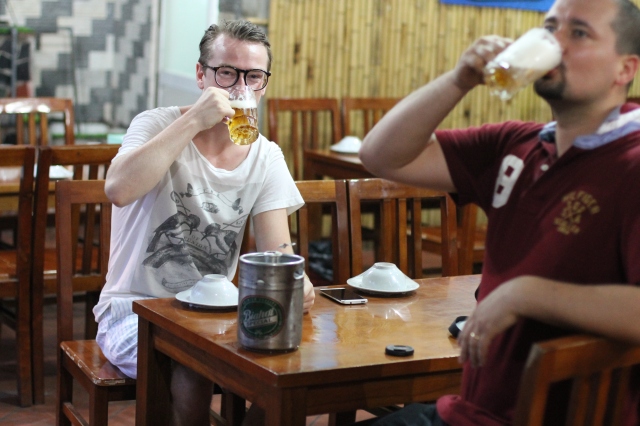 Walk a few hundred meters to Goldmalt Trung Yen and have a few beers. After that walk 5 minutes to Mai Vien Brauhaus at 145 Trung Hoa where two full bodied Czech styled beers are waiting to be tasted. Watch a Video clip of Mai vien Brauhaus: http://www.youtube.com/watch?v=RT310zPhSv0 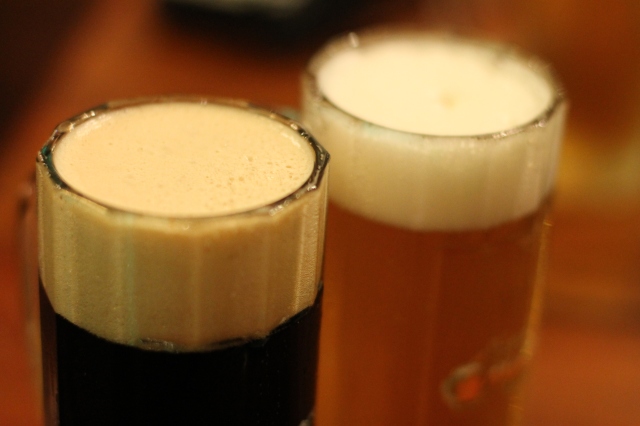 If you still are thirsty. Walk along Trung Hoa street until the big crossing and 100 m to the right to enter Truc Vien that has interpreted the Czech beer style their way. They have also one black and one blond beer on tap. Address: 40 Tran Duy Hung, district Cau Giay, Hanoi Video clip: http://www.youtube.com/watch?v=olALOc3NuPo

If you still are thirsty.. well there are 20 more breweries in Hanoi to visit.. find them all at https://beervn.com/microbrewerieshanoi/

1 Response to A different pub crawl in Hanoi