A journey of joy with extra bonus

The first tour of the year started with full speed. We were 11 thirsty beer lovers that gathered at Hoavien to start the tour with the famous fried cheese and two beers. We made a small inspection of the brewery equipment before heading of to the nearby Goldmalt. 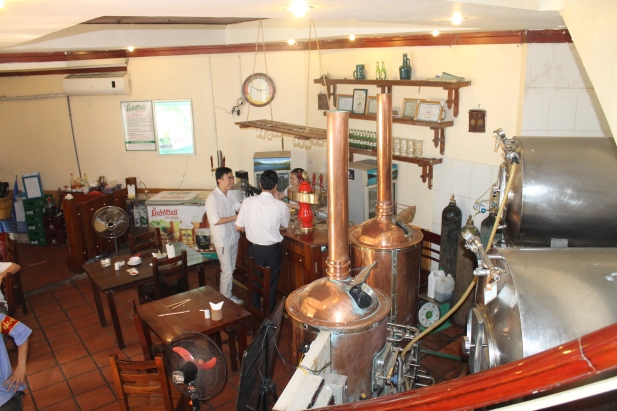 Goldmalt at nr 65 Ngo Thi Nam is quite small but they are currently rebuilding at the second floor and will make it bigger. We were supposed to see them cooking here this day but some technical problems didn’t allow us to. Here they brew 1-2 hundred liters at a time which really is micro so some times they have to fill up with beer from other goldmalts. Both beers here were really good, the black was full bodied and so also the blond one.

After that we went a few kilometres to next Goldmalt at 416 Xa Dan to state that they are all individual microbreweries and taste was different. Less malt inside the blond beer at this Goldmalt, a bit better than for three months ago, but not as good as in the first Goldmalt. Black beer was at the moment not served here. So we made the visit short.

Next stop was Goldmalt at nr 9 Hoang Cau, you can not find this place on the VIP-cards or business cards, only on www.goldmalt.com.vn. Less than one percent of all customers at Goldmalt are foreigners, so we were heavily surprised to see a big group of Czech people at this restaurant this evening.

Budweiser Budvar is a Czech beer and soon a Slovakian company will open up one of the biggest Budvar breweries in Vietnam. The beer is served in the US with the name: Czechvar. Today you can get the blond Budvar on tap at 5-6 places in Hanoi.  This place has the blond Goldmalt beer but also the black Budweiser Budvar instead of the black Goldmalt beer. This is the only place that serves the black one on tap. Of all the three Goldmalts, the first one had the best beer and also both kinds. The black Budwar costs 57 000 VND, compared with 34 000 (1 USD) for a black tasty Goldmalt with much more body and flavour than a black Budvar.

Empty at Legend Beer. This Friday was a slight schock at Legends beer at nr 4 Vu Ngoc Phan. Normally its crowded and people smoke and drink while live bands and artists performs at the stage, today already by 9.30 pm, we were more or less the only customers. Legends, has since two years ago a menu with four kinds of beer, but only two in reality, the blond and the black. German styled lagers with less malt and hops than Goldmalt, also a bit more expensive. (picture below from a previous visit).

After five breweries we ended up at Mai Vien Brauhaus and everyone was impressed by the black beer which is full bodied and full on coffee and chocolate notes. Here a picture of hops pellets used by Maivien Brauhaus. The hops is added during two different times during the boiling of the beer, first amount is for the bitterness and the last hops is added 10 minutes before the end to give the beer extra aroma. For 400 liters of beer, Mai Vien uses about 80-100 kg malt and almost 1.5 kilo Hops.  Picture shows a few gram of Czech sass hops.

The blond beer was also really good and it was hard to say if Goldmalt 65 Ngo Thi Nam, Hoavien or Maivien has the best blond beer in town? There we met a group of expats from the Bia Hoi appreciation group at Mai Vien who use to meet at Bia Hoi but also at microbreweries for a social evening and they also found the beer really tasteful. Its nice to see that more and more people start to drink hand crafted beer in Vietnam.

Next brewery tour will include the Legend Beer in My Dinh and also a place called Pho beer and the Goldmalt at 398 Truong Chinh.