First stop was Cientos brewery, a german inspired brewery with two kinds of beer, a black one, little sweet but tasty and the blond one which had more taste of malt than usual. Big beer hall with east european style paintings and the beer was quite good.

A 5 min taxi ride later, we tried the beer at the Eresson brewery, a really nice place, suitable for both eating and drinking. Fast service, fresh kitchen, 3 different beer on tap of which the blond one was really good. That was the best beer so far in Hanoi. Eresson brewery is huge and has a big capacity, prices are low both for beer and the german inspired kitchen. For a small glass (ca 33cl) of beer you pay 30 000 vnd.

After Eresson a taxi took us via the highway, passing Keangnam tower (330 m high) to Legend beer brewery at4 Vu Ngoc Phan in 10 minutes  . At the menu there are 3 beers but they had 2, black and blond. Compared with cientos and eresson, the taste was not as balanced as cientos beer and the overall taste was not so good either. 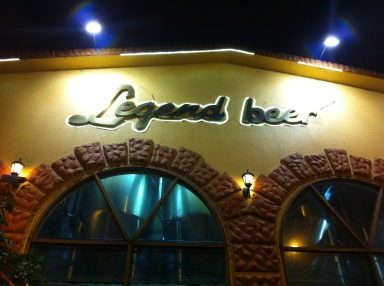 From Legend beer the taxi took us closer into city and lake Truc Bach to Pilsner urquell, czech inspired both regarding beer and food. The beer prices are double compared with the other ones and for a big glass (50cl) of beer you have to pay around 90 000 vnd. The taste is quite robust despite its a lager and the kitchen has a good reputation.

Another 5 min with taxi and we ended up in the expat area, Tay Ho and Jen’s & Friends, a small pub for maximum 20 people by the main road in Tay Ho. They have one beer on tap, russian lager, good for a hot summer day but not strong enough to bring you joy when you want something tasty later on in the evening.

The beer beer this tour: The blond beer in Eresson brewery, well balanced, hoppy and a bit sweet.

Beer brewer, writer and traveller. In the beer business since 2012. Published beer guide to Vietnam 2014. The first craft brewer in Burkina Faso 2016. Beer guide in Morocco 2017-2020. Beer journalist since 2016 and from 2023 writer for the Swedish beer magazine Maltesen.
View all posts by Beertraveller →
This entry was posted in Activities and news and tagged beer in Hanoi, beer tours, breweries in hanoi, brewery tours hanoi. Bookmark the permalink.