Pasteur street brewing company is the newest brewery in Vietnam and the first to produce a wide range of handcrafted beer located in the heart of Ho Chi Minh City.

The team behind Pasteur street brewing company is Alex Violette and Bethany Lovato from Colorado along with John Reid; an American who has been living in Vietnam for a few years. There are many who have tried to open a brewpub like this one in Vietnam but this is the first one to succeed. It’s really difficult for foreigners to run small scale businesses in Vietnam and requires a lot of patience and a strong dedication.

Currently, their tasting room is the only location to try their beers which is open Friday-Sunday from 11am-10pm. The menu will change frequently and they will also debut a small food menu to pair with their beers soon. The ingredients used are a combination of local specialties and international malts and hops. As of today all breweries in Vietnam import malt and hops, only the rice is produced locally. Most pale lagers in Vietnam has a mix of rice and malt; Pasteur Street produces their beers exclusively with malted barley in order to get full bodied flavors.

Beer history is made in Vietnam

There are about 45 local microbreweries in Vietnam making Czech and German style lagers but the trend with Ale and IPA (India Pale Ale)  has been waiting until 2014 to make its entry into the beer history in Vietnam. The first brewery that had an Ale on tap in Vietnam was Luoisiane Brewhouse in Nha Trang and the second was Platinum ale that came out with the first mass (delivering to more than 10 places) produced ale in Vietnam 2014. Platinum ale can be found at many beer clubs in Ho Chi Minh City. Pasteur brewing Company is the first one that serves several different beer styles on tap with a more experimental approach. Pasteur Street brewing is added to the Vietnamese beer map below and expect to hear more from them later on. 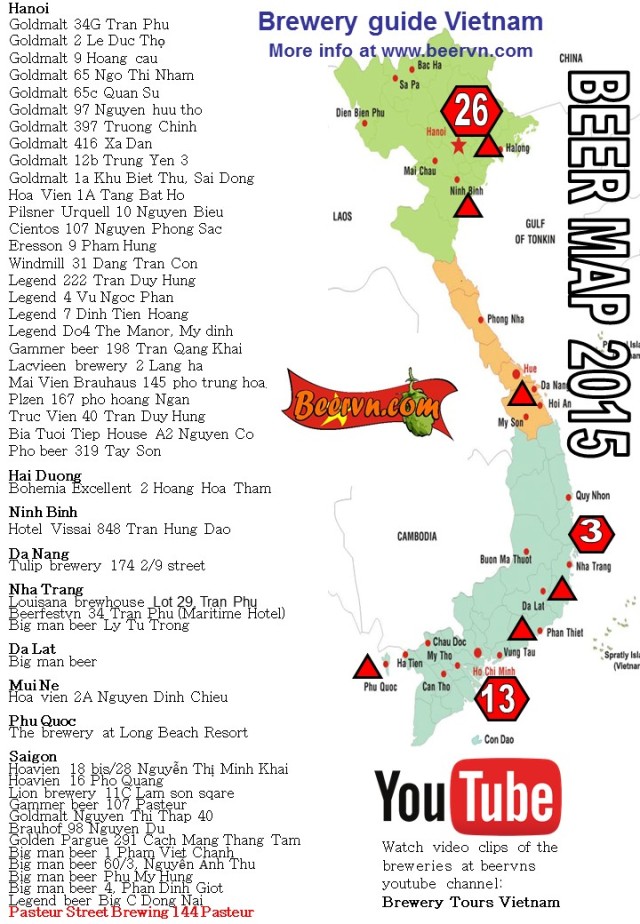