Posted on February 19, 2014 by Beertraveller

We started with a black and a blond beer at Golmalt 65 Ngo Thi Nam. This is a Goldmalt with many regulars and the brewing equipment is visible directly when you enter this two storey brewpub.

One important detail for the beer enthusiast is that you can get the special beer which is a beer that is fermented inside the bottle and therefore also a bit cloudy (from the yeast and some malt) but also more tasty than a regular lager.

After this Goldmalt the tour intended to head for Pho beer but because of a driver that failed in geography we were driven to a totally different destination. It’s not the first time, but luckily there are breweries almost everywhere in Hanoi so we made a short beer stop at Goldmalt 34 Tran Phu a.k.a. Mother Goldmalt, the first of 7 Goldmalts in Hanoi. You are greeted by the boiling barrels when you enter this Goldmalt. This brepub is almost 10 years old and the brewery is situated beneath the first floor. 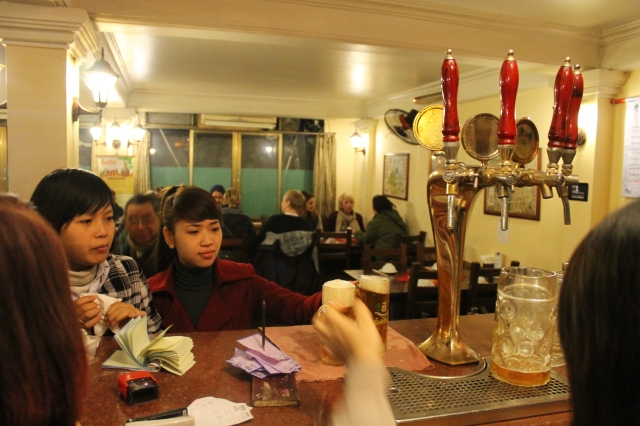 First visit at Pho beer. After some beers here we made the long ride to Pho beer. This was the first time the brewery tour made a stop here and a few other that worked in the neighbourhood came to join us for a few beers.

How about the beer? Well if you pay 17 000 VND for a glass of draft beer you can’t expect much but at this place you get a lot of beer for that money. This is still a beer brewed with Czech malt and hops, but slightly lighter than the more full bodied older cousin at one of the Goldmalts. 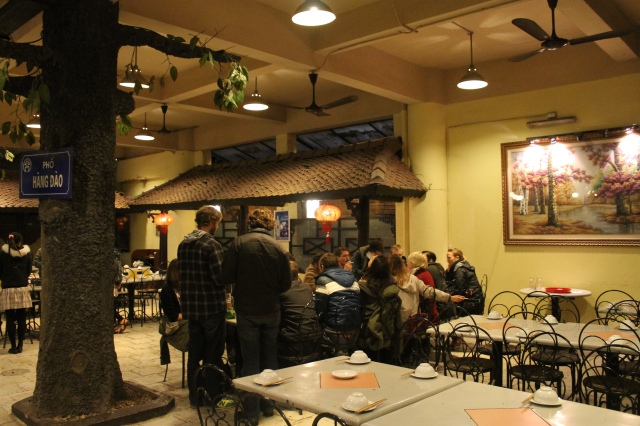 The feeling of beeing outside but sitting inside gives this place an interesting twist together with some other funny facts. After a big amount of beer you can also enter the very expensive equipped night club that is situated in the cellar. A huge place for hundreds of guests and said to be in action almost every night. Service and menu here is like every where else in Hanoi and its quite far away but you wont get any better beer for that price. Address: 319 Tay Son. This place is also very close to Goldmalt at 398 Truong Chinh.

The black beer had some more taste and structure than the blond lager. Service here is fast and really good and staff are used to foreigners and speaks english. Food here is good and you also little more for it than in other breweries. Many come here to eat seafood, you can see the aquariums by the entrance, full of fish waiting to be served on your plate.

The manager here is a nice guy and you can find him sipping on beer by the bar desk almost every evening. You get better service here than in the other Legend beers. After this place we went back towards the city to drop of all beer enthusiasts from tonights tour. The time was almost 11 pm when we left which means that almost every brewery in Hanoi was closed. Watch a youtube clip from the visit here: http://www.youtube.com/watch?v=eU0yF5c73Eg

Thirst for a black beer? Even the fish at Maivien brauhaus seems to like it..

Here is the actual map of the tour we took and if you want to find out more about all breweries in Hanoi, read here: https://beervn.com/microbrewerieshanoi/

You can also find video clips from each place at Beervn.com’s youtube chanel: http://www.youtube.com/channel/UCPVwuxTR9ggy4P_hSfbE1Ew?feature=watch 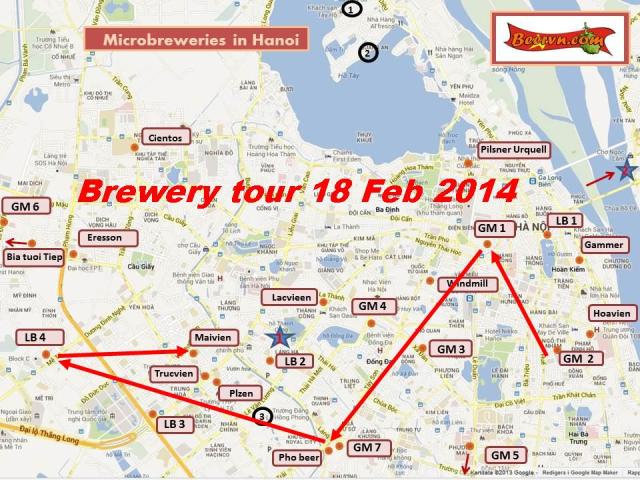 1 Response to Brewery tour in Hanoi